Hi I’m Dory & this is my story

Finding Dory & finding out if you should swim to Theaters to see it! 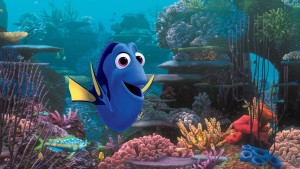 Hi, I’m Dory and this is my story.

Hi, I’m Dory and this is…wait.

Dory is unforgettable. Though she may have forgotten her past, her memories are there somewhere in the great big blue.

Like usual, Disney•Pixar has brought all the emotions with Finding Dory. This one speaks WHALE-ish to my soul… parenting a child with special needs & adoption.

Every parent wants to know that they are prepping their child properly to face the world head on. But what if they have a learning disability? A coping disability? The struggle is real. I don’t say that lightly. It’s a real fear. You constantly bring up scenarios with your littles to prep them of what if this happens, what do you do? You have to re-word things carefully and ask, does this make sense? Everything has to be so literal. Watching Finding Dory and knowing Dory has a disability that her parents were so worried about from day one had me nervous for my little boys future; would he be okay?

We saw in Finding Nemo that Dory is basically adopted as family to Marlin and Nemo. In Finding Dory, we slightly dive deeper in that process.

Adoption hits close to our home, my family adopted my little sister when she turned 10 (it would have happened years before since she was with us since she was two but the justice system works in it’s own way. And like Forrest Gump says, “that’s all I have to say about that.”) But just as my little sister began her journey on getting to know her biological parents, Dory remembers her parents and wants to find them. Adoption is a wonderful thing that I have been drawn to for years but when you are the adoptee what emotions and questions do you have?

Watching Finding Dory touches on the adoptee side. Oh the tears. 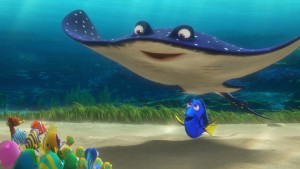 Young Dory’s voice is just priceless. Hearing her say, “I suffer from short term memory loss” is almost too much for my soul to handle. As she ages, we (finally) get a bit of emotional relief when we hear Dory in Ellen DeGeneres’ voice. I have to wonder, if Dory were to ever dress in clothes, would she wear a cute blazer too? 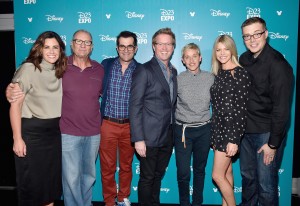 Disney•Pixar’s “Finding Dory” welcomes back to the big screen everyone’s favorite forgetful blue tang Dory (voice of Ellen DeGeneres), who’s living happily in the reef with Marlin (voice of Albert Brooks) and Nemo (voice of Hayden Rolence). When Dory suddenly remembers that she has a family out there who may be looking for her, the trio takes off on a life-changing adventure across the ocean to California’s prestigious Marine Life Institute, a rehabilitation center and aquarium. In an effort to find her mom (voice of Diane Keaton) and dad (voice of Eugene Levy), Dory enlists the help of three of the MLI’s most intriguing residents: Hank (voice of Ed O’Neill), a cantankerous octopus who frequently gives employees the slip; Bailey (voice of Ty Burrell), a beluga whale who is convinced his biological sonar skills are on the fritz; and Destiny (voice of Kaitlin Olson), a nearsighted whale shark. Deftly navigating the complex inner workings of the MLI, Dory and her friends discover the magic within their flaws, friendships and family. Directed by Andrew Stanton (“Finding Nemo,” “WALL•E”), co-directed by Angus MacLane (“Toy Story OF TERROR!”), and produced by Lindsey Collins (co-producer “WALL•E”), Disney•Pixar’s “Finding Dory” swims into theaters June 17, 2016.

Because Dory is on an adventure, we meet quite a few characters, some are quite unforgettable: 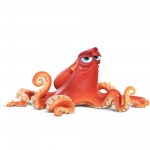 Hank, you won’t forget him, he’s a cranky (7-legged) octopus. Ed O’Neill voices Hank and is a perfect match UP. 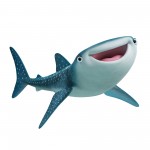 Destiny, a whale shark who we can all thank for introducing Dory (and us) to speaking WHALE. 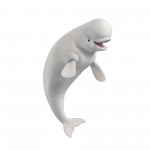 Bailey, a beluga whale who believes his sonar doesn’t work 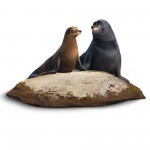 Fluke & Rudder, two sea lions who help Marlin and Nemo… and let us humans know what they really are saying when they are barking on the rocks!  (Finally! I have always wondered!)

FINDING DORY – When Dory finds herself in the Marine Life Institute, a rehabilitation center and aquarium, Hank is the first to greet her.

Destiny, a whale shark, who’s nearsighted, and a beluga whale named Bailey who thinks his biological sonar skills are on the fritz.

FINDING DORY – Marlin and Nemo get guidance from a pair of lazy sea lions in an effort to catch up with Dory.

Here’s a FIN-tastic FACT about Hank:

“LUCKY NUMBER SEVEN – When designers were working on Hank, the cantankerous octopus in “Finding Dory,” they created tapered tentacles for the cephalopod. The tentacles were modeled separately from the body, but when they tried to attach them, only seven would fit. Filmmakers later decided that it made sense that Hank would have an affliction, so they worked it into the script.” 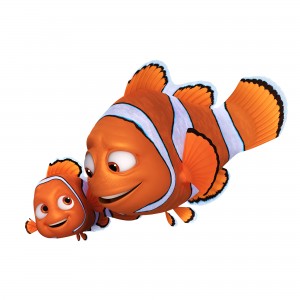 I feel like Marlin in the beginning of Finding Nemo a lot (I like to keep a short leash (not literally) on our littles. I often borrow the phrase from Marlin, “hold my fin, hold my fin” to our littles)

In Finding Dory, Marlin (with Nemo of course) is on a mission. What would Dory do?

There is a big message that I love, trust your INSTINCTS, you have to listen to it. This is so important to instill in your littles and remind yourself constantly too. Also, tell your family and friends how much they mean to you. 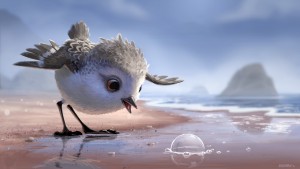 I also want to chat a minute about the Pixar short, Piper.

This is a gem! Piper is a good little reminder that we can do big things, no matter our size. Face your fears, look at them from a different point of view and go for it… it may not be the typical way and that’s fine, it’s your way. 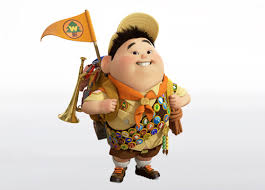 Yes, there are a few scenes that my little guy jumped in but nothing overly frightening.

All in all, it is amazing!

I give Finding Dory

Remember to take time to enjoy your favorite unforgettable view  &

stay until the very end for a scene after the credits!    😉

One Response to Hi I’m Dory & this is my story