My Mom Review of SOLO: A Star Wars Story

We got to see an early screening of SOLO: A Star Wars Story a couple days ago. So what is this movie all about? Can you take your kids to this? I’ll let you know in this spoiler-free land.

Alden Ehrenreich is Han Solo and Joonas Suotamo is Chewbacca in SOLO: A STAR WARS STORY.

Board the Millennium Falcon and journey to a galaxy far, far away in SOLO: A Star Wars Story, an all-new adventure with the most beloved scoundrel in the galaxy. Through a series of daring escapades deep within a dark and dangerous criminal underworld, Han Solo befriends his mighty future copilot Chewbacca and meets the notorious gambler Lando Calrissian, in a journey that will set the course of one of the Star Wars saga’s most unlikely heroes. The film stars Alden Ehrenreich, Woody Harrelson, Emilia Clarke, Donald Glover, Thandie Newton, Phoebe Waller-Bridge and Paul Bettany. 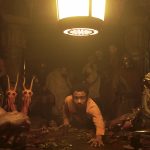 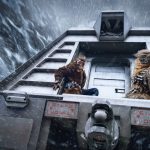 Alden Ehrenreich is Han Solo and Joonas Suotamo is Chewbacca in SOLO: A STAR WARS STORY. 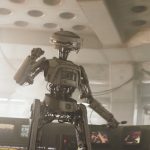 Phoebe Waller-Bridge is L3-37 in SOLO: A STAR WARS STORY. 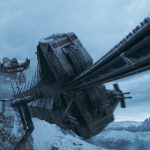 Thandie Newton is Val, Woody Harrelson is Beckett and Alden Ehrenreich is Han Solo in SOLO: A STAR WARS STORY. 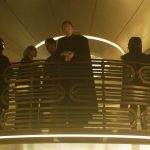 In this standalone film, you will learn about how Han became Han Solo; this is his story and when he and Chewbacca meet. You will also see familiar faces like Lando and some new ones that may become your new favorite. It’s funny, thrilling, a bit darling, and as expected, daring all wrapped in a hyper ball of fun! Punch it!

This movie has quite a feel of an adventure to it. In fact, I felt like I should have been seeing this IN 3D and wondering what my experience would have been had it been. The movie has so many scenes in it that could easily be put into an attraction at any Disney Park and I caught myself moving with the characters. I LOVED the score, too!

Star Wars fans will love the droid introduced and the alien-like characters or creatures are all classic looking. Lando and L3-37 were scene stealers for me; I couldn’t get enough of them! I loved every bit we got of Chewie. Man, I love that bearded sidekick!

CAN YOUR WILDERNESS EXPLORERS SEE THIS?

We didn’t take our kids to this screening of Solo but we will be taking them to see it as soon as it hits theaters on May 25th. There is no sexual content, very little swearing, and the violence level is expected when it comes to Star Wars. (It’s not like Rogue One.) I felt like this was more thrill/intense than violent. There are fighting scenes and bad guys but nothing too intense besides one very large “creature” scene that will be a jump scare. (There’s always one, right?!) I think 7 and older can handle it. But, like I always recommend, you know your littles the best, so if you’re unsure, go see it first.

Watch this video below, at the end, it shows a snippet of the “creature” I refer to.

Yes, five balloons. This standalone film held itself just fine. It starts full speed ahead engaging you with excitement, thrill and laughter. Then captivates you with the depth of the story. Star Wars fans will love this movie; there are connections throughout and at eluding to other films. We left the movie asking if another standalone would be made for more of Lando or Chewbacca’s story. You definitely need to see this film and take your family and friends.

SOLO: A STAR WARS STORY opens in theatres everywhere on May 25th!