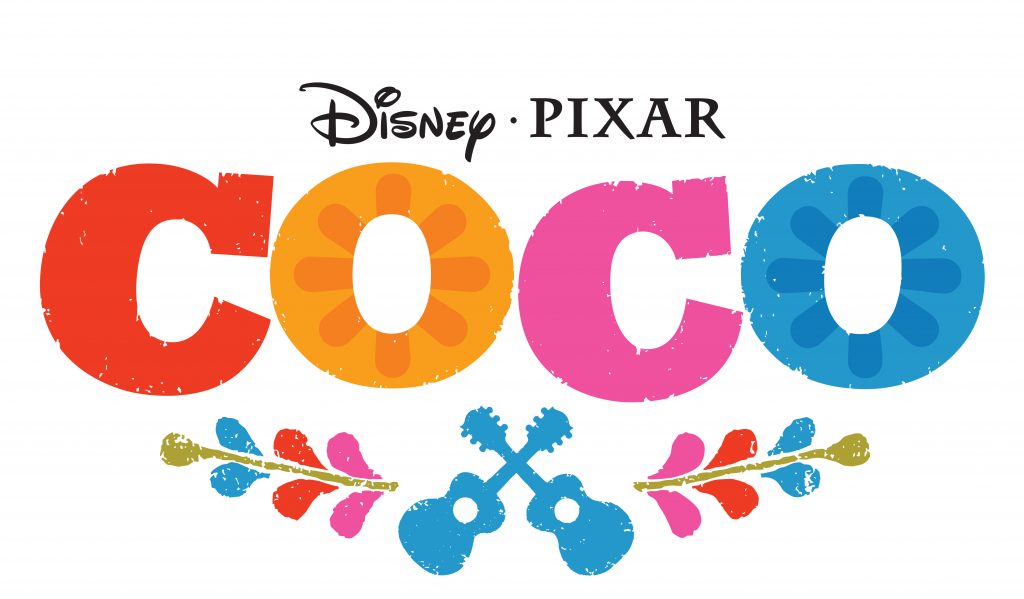 Many times you will find me day dreaming about traveling to Norway to learn more about my ancestors. I love everything about family heritage and ancestry. COCO is about this, tradition, about how we all walk in different shoes and how we got there and so much more. I cried a lot in this movie.

“Despite his family’s baffling generations-old ban on music, Miguel (voice of newcomer Anthony Gonzalez) dreams of becoming an accomplished musician like his idol, Ernesto de la Cruz (voice of Benjamin Bratt). Desperate to prove his talent, Miguel finds himself in the stunning and colorful Land of the Dead following a mysterious chain of events. Along the way, he meets charming trickster Hector (voice of Gael García Bernal), and together, they set off on an extraordinary journey to unlock the real story behind Miguel’s family history.”

Coco is a vibrant and dimensional animated movie that will move your soul and make you feel something for loved ones that have passed on before you. It’s a story that will cause you to pause and look down. Why? I can’t tell you this tidbit because, spoiler, but I will say I appreciate this art form or craft much more. (There is a fun Easter Egg in the beginning when Miguel is explaining his family.)

The music in COCO has one of my all-time favorite composers, Michael Giacchino, who also composed for Disney•Pixar’s UP, which I’m a bit biased toward. And speaking of UP, this movie may make you reminisce a bit, remember how much you loved Dug?!? Well Dante, Miguel’s dog whose tongue seems to flop out of his mouth (a lot!), is quite endearing too! Dante was my favorite sidekick character.

BLESSED? – Aspiring musician Miguel learns from the head clerk in the Department of Family Reunions in the Land of the Dead that he’ll need a blessing from a family member to return to the Land of the Living. But Miguel’s great-great-grandmother Mamá Imelda’s blessing comes with an unfortunate condition. Featuring Anthony Gonzalez as the voice of Miguel, Gabriel Iglesias as the voice of the clerk and Alanna Ubach as the voice of Mamá Imelda, Disney•Pixar’s “Coco” opens in U.S. theaters on Nov. 22, 2017. ©2017 Disney•Pixar. All Rights Reserved. 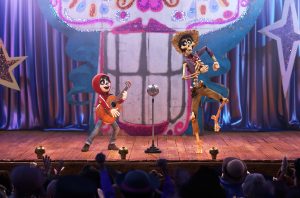 COCO (Pictured) – UN POCO LOCO – In Disney•Pixar’s “Coco,” aspiring musician Miguel (voice of Anthony Gonzalez) teams up with a charming trickster named Héctor (voice of Gael García Bernal) to unravel a generations-old family mystery. Their extraordinary journey through the Land of the Dead includes an unexpected talent show performance of “Un Poco Loco,” an original song in the son jarocho style of Mexican music written by co-director Adrian Molina and Germaine Franco for the film. “Coco” opens in U.S. theaters on Nov. 22, 2017. ©2017 Disney•Pixar. All Rights Reserved.

GIVE THE DOG A BONE — An unlikely star of Disney•Pixar’s “Coco,” Dante is a Xolo dog—short for Xoloitzcuintle—the national dog of Mexico. Nearly hairless and missing some teeth, Dante has trouble keeping his tongue in his mouth. But he’s a loyal companion to Miguel, an aspiring musician who hopes to follow in the footsteps of his idol Ernesto de la Cruz. Featuring the voice of newcomer Anthony Gonzalez as Miguel and Benjamin Bratt as de la Cruz, “Coco” opens in theaters Nov. 22, 2017. ©2017 Disney•Pixar. All Rights Reserved.

There is a message in the movie:

No one is going to hand you your dream, it is up to you to grab it. Seize your moment.

I love this. COCO has a few messages in this movie, I left the theater with a full heart; full of LOVE, family, and passion for life.

COCO (Pictured) – DON’T FORGET THE SHOES – In Disney•Pixar’s “Coco,” Abuelita (voice of Renée Victor) and Miguel (voice of Anthony Gonzalez) ensure that their home is adorned for Día de Muertos, including an elaborate ofrenda that holds several framed family pictures, flowers, candles, favorite foods and—because they are in the shoemaking business—shoes. “Coco” opens in n U.S. theaters on Nov. 22, 2017. ©2017 Disney•Pixar. All Rights Reserved.

COCO hits theaters this week just in time for Thanksgiving, and with this holiday comes many traditions. For my family, we always watch a movie. COCO introduces you to Dia de Muertos which is not celebrated on Thanksgiving but reminds you to celebrate tradition and your family. 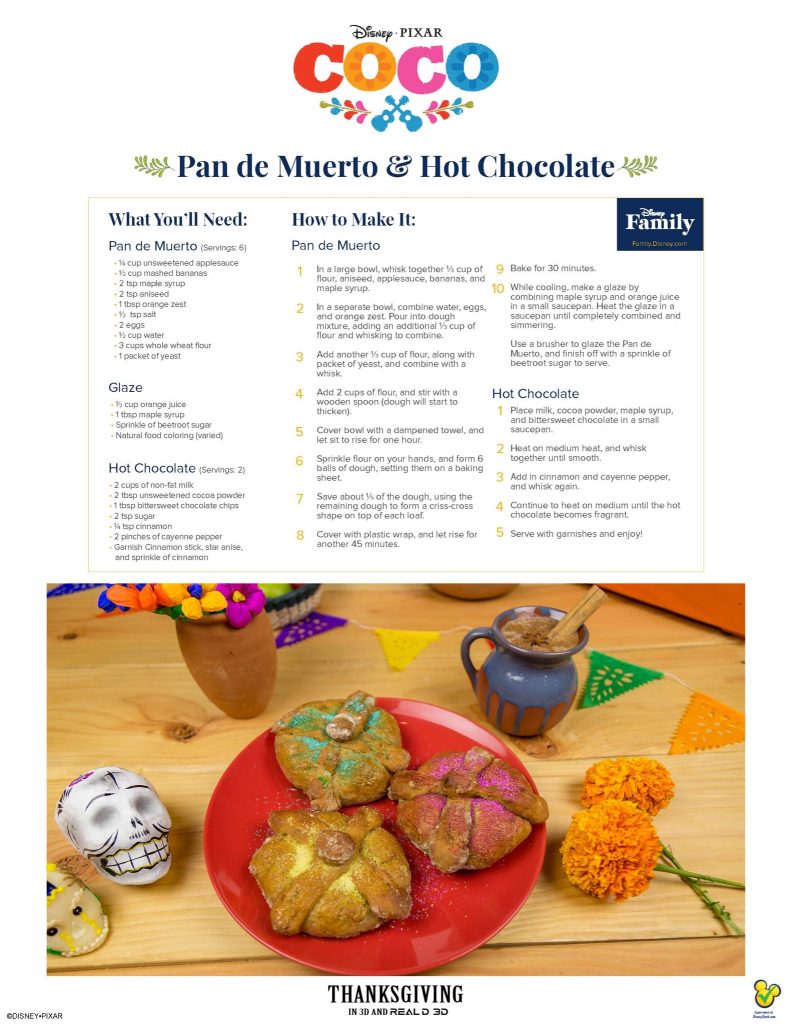 Remember a couple weeks ago when I had the opportunity to interview one of the Pixar Artists from COCO?

Here’s some of those fun details from my time with Clothing Lead Animator, Emron Grover:

Who came up with the concept of entering the Land of the Dead?

“Our director, Lee Unkrich, he loves Dia de Muertos, he did. He loves the Holiday, the art and the culture. He came up with a story that centered around that.”

Did you know a lot about the Holiday and the culture before you started working on the project?

“I knew some. I actually vacation to Mexico about every year, but not much. I knew the visuals, the skeletons, like the sugar skulls and the ideas about paying homage to your ancestors but that is about it. I learned a lot.”

Did you get to take a trip down to Mexico before working on the project?

“I didn’t personally but the story writers and character animators went down several times.”

They took a familiarity trip to Mexico to study the culture, details of the city and clothing. They took tons thousands of pictures and video footage our their trip and then publicized it all within the company for the COCO artists to assist in designing the intricate details you see on each character in COCO. They also ordered authentic clothing from Mexico to study and had period customs.

What did you specifically work on for COCO?

“I was the tailoring lead. I’m in charge of the team who builds all the clothing in the movie. We clothed all the humans and all the skeletons. There is a whole world of skeletons.”

Was it hard to cloth skeletons?

“Yes. There is a lot of intricate details of how to do it. The hardest thing is in 3D cloth, it’s all math, physics, and geometry. If you have a shirt, in the 3D world it is made up of triangles. Each triangle has a point. The math to detect the body underneath it, that it falls onto, is really hard and time intensive. The smaller the thing that you are trying to collide against, the harder the problem is. Because bones are thinner than arms, we knew we would have a hard time with the clothing going right through the bones. We spent 3 years developing a better collision detection system, a system that would be able to collide with very small objects.”

I asked Emron which character he connected with the most?

He said it was a hard question to answer but probably Hector because he worked on him the most. But also Mama Imelda because she is the Matriarch of the Rivera family, what she has gone through in the past – she doesn’t change. (I connected with both of these characters too for unique ways.)

However, Hector, was his favorite character to design the outfit for. 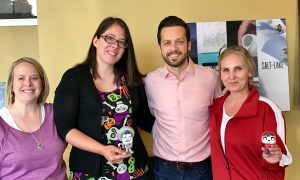 Thank you, Emron, for taking some time out of your busy schedule to sit down with us. COCO was beautiful! Thank you for sharing your art once again with all of us.

Yes, kids of all ages will love COCO. I of course will caution you that there are skeletons in this movie. You will see skeletons. Lots of them. There are a couple intense parts. The skeletons will crumble and remove their heads at times but not in a creepy-Halloween-way, more in a funny way. Pepita is a LARGE folk art character that growls a few times and the growl and her pounce may cause a scare-jump.

COCO is full of heart. You will learn about a beautiful culture and see what a timely movie this is. Prepare your heart and emotions for an adventure you’ve never been on. Pixar has done it again and I LOVED it!