Can My Kid See Ralph Breaks The Internet?

My family and I attended an early screening of Disney’s Ralph Breaks The Internet and it was NOT a doody – we absolutely LOVED it! 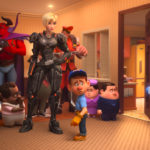 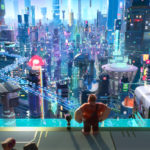 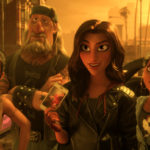 “In RALPH BREAKS THE INTERNET, video-game bad guy Ralph (voice of John C. Reilly) and best friend Vanellope von Schweetz (voice of Sarah Silverman) leave the comforts of Litwak’s arcade in an attempt to save her game, Sugar Rush. Their quest takes them to the vast, uncharted world of the internet where they rely on the citizens of the internet—the Netizens—to help navigate their way. Lending a virtual hand are Yesss (voice of Taraji P. Henson), the head algorithm and the heart and soul of the trend-making site “BuzzzTube,” and Shank (voice of Gal Gadot), a tough-as-nails driver from a gritty online auto-racing game called Slaughter Race, a place Vanellope wholeheartedly embraces—so much so that Ralph worries he may lose the only friend he’s ever had. Directed by Rich Moore (“Zootopia,” “Wreck-It Ralph”) and Phil Johnston (co-writer “Wreck-It Ralph,” “Zootopia,” writer, “Cedar Rapids”), and produced by Clark Spencer (“Zootopia,” “Wreck-It Ralph,” “Bolt,” “Lilo & Stitch”), “Ralph Breaks the Internet” hits theaters on Nov. 21, 2018..”

Disney’s Ralph Breaks The Internet is a movie for the whole family. This movie dives deeper into the relationship aspect of Vanellope and Ralph. I think whatever lens you’re wearing, whether that be parental or them as friends, this movie will speak to you and help you grow and may even make you feel emotional.

Parents of special needs kiddos: this one may get to you with the glitching part and nervousness and how those “ticks” are more prevelant during high stress times; get your tissues ready.

But, don’t worry, it’s TONS OF FUN! Because, Ralph and Vanellope. Those two will have you laughing like crazy! The animation and creativity of things like the inner workings of the interwebs is AMAZING.

“Best friends don’t always have to have the same dreams.” – Shank

The Duo visits the internet section of Oh My Disney! Now, this is something we had a little extra giggle because of our recent Disney People video we made and the fact that we saw our UP House make a cameo in it. #DisneyMagic

The Disney Princesses scene is everything! You will be laughing so hard. Disney did a good job of bringing up some of the silly stereotypes regarding them: breaking out in song, waiting for their prince, wearing gowns and/tiaras, parent issues or deaths, etc.

Now I admit, I love just about every Disney Princess, but as I’m evolving as a human, as a Mama, I’m falling more in love with Vanellope’s character and she’s quickly rising to the top. She’s the every day girl: average-sized waist, yoga pants, sweatshirt. This is how a lot of girls (and Mamas) love to dress! She is independent, witty, casual, chill, honest, and best of all, she is celebrated for her uniqueness. She has a guy best friend but doesn’t rely on a prince to save her; with teamwork, they get a job done. 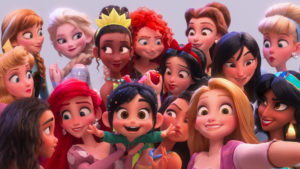 “All friendships change, but the good ones get stronger.” – Shank

Stay until the VERY END of the credits!

CAN YOUR WILDERNESS EXPLORERS SEE THIS MOVIE?

Your little wilderness explorers can see this movie. What were the jump scares? A few mild ones: About 30 minutes into the film, when Vanellope is in a new game, a large shark jumps out of the ground and is startling and actually captures another creature. A little later, we see an internet “virus” creature character and this dark character is creepy and he then creates a LARGE virus (think computer talk) Ralph. For about 10 mins or so, littles may be nervous about this large-sized Ralph. Disney is always fantastic about bringing it back down and having a wonderful lesson in there. I think kids of all ages will be fine (at-least an age that can sit through an animated movie).  🙂

I LOVED everything about this movie and gave it five balloons. We’ll purchase this on DVD as soon as possible. Wreck-it-Ralph means so much to our family and this new movie helped with our personal story!

RALPH BREAKS THE INTERNET IS IN THEATERS NOW!