My family and I attended an early screening of Disney’s upcoming live-action adventure of Christopher Robin the other night and it is sweet like honey! You may need to bring tissues because this one will evoke emotions in you. I also recommend a drink – I noticed I was thirsty, this may be because of the honey scenes. BUT, don’t drink too much because you don’t want to have to leave during the film. I wish I had another week to analyze my thoughts. I loved it so much but not because it was another Disney movie, because this movie moved my soul!

In Disney’s heartwarming live action adventure, the young boy who shared countless adventures with his stuffed animal friends in the Hundred Acre Wood has grown up and lost sight of what’s important in life. Now it is up to his childhood friends to venture into our world and help Christopher Robin rediscover the joys of family life, the value of friendship and to appreciate the simple pleasure in life once again.

CHRISTOPHER ROBIN is directed by Marc Forster from a screenplay by Alex Ross Perry and Allison Schroeder and a story by Perry based on characters created by A.A. Milne and E.H. Shepard. The producers are Brigham Taylor and Kristin Burr, with Renée Wolfe and Jeremy Johns serving as executive producers. The film stars Ewan McGregor as Christopher Robin; Hayley Atwell as his wife Evelyn; Bronte Carmichael as his daughter Madeline; and Mark Gatiss as Keith Winslow, Robin’s boss. The film also features the voices of: Jim Cummings as Winnie the Pooh and Tigger; Brad Garrett as Eeyore; Toby Jones as Owl; Nick Mohammed as Piglet; Peter Capaldi as Rabbit; and Sophie Okonedo as Kanga.

The movie starts with Christopher Robin and his pals from the Hundred Acre Wood having a farewell party because he has to go to boarding school. Christopher Robin then goes to a University, gets married, then goes off to fight in WWII. Afterwards, he comes home and finds a job with great responsibility in a supervisory position. He has to make a tough decision: either spend family time like planned or work extra hours like a supervisor sometimes must to take care of his work family.

Pooh has come back into his life to show him simplified clarity at a critical time in Christopher Robins’ life. Adults sometimes can struggle with slowing down and thinking simple like a Pooh Bear. Pooh is eventually able to show Christopher Robin that today matters, the now, through a simple game of “Saying What You See”.

Winnie the Pooh is a simple minded bear with a big heart. He has always taught us to see life as the way it is. In this movie, Pooh reminds Christopher Robin to simply live life in the now. Through Pooh’s way of thinking simply and posing questions to Christopher Robin, he is able to help him see his life clearer: What brings him joy? Does his work bring him joy? What does he hold to be very important? Do his actions match his words? If his life is full of drive, the moving up the chain, does that align with his intent?

If you are always looking toward the future, working on your game, how can you enjoy what is right in front of you? Also, stewing on your past, be it regrets, mistakes, losses, you’ll miss what’s blooming right now.

One surprise delight for me, was getting to see Eeyore shine. (I know, Eeyore shining seems a bit like an oxymoron, right?) I didn’t expect to laugh so much at his scenes. But he really was a unexpected star for me in this movie and I LOVED every time we got to see him. He’s a true treasure of The Hundred Acre Wood friends. 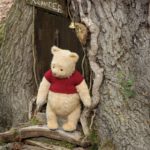 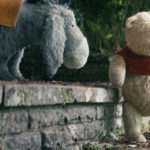 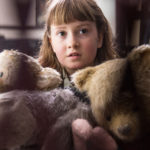 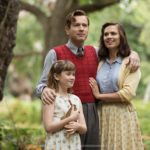 CAN YOUR WILDERNESS EXPLORER SEE THIS MOVIE?

Yes, kids of all ages can enjoy Christopher Robin. They may notice that their friends from The Hundred Acre Wood have a softer almost vintage look from the familiar brighter versions they may be used to, but I found this look is just as cuddly and definitely warm and inviting. In fact, we all left the theater saying we want the new plushies!

The Heffalumps and Woozles scenes are nothing to fear and will bring a smile to the adults when they learn the storyline to it.

Christopher Robin is an all-around family-fun movie. I recommend watching The Many Adventures of Winnie the Pooh before seeing Christopher Robin, some of the nostalgic references are from this movie.

Yes, 5 BIG red balloons that made me feel HAPPY! And every time that Pooh said balloon in the movie, I wanted a balloon myself, a simple balloon. Winnie the Pooh is a simple minded bear with a big heart. I think everyone will take away something different from this movie based on where you are in your life. Some may love it for the nostalgia of this beautiful live-action adventure. Others, may love the adventure happening in The Hundred Acre Wood. There are some that may grow from the message Pooh gives of what’s very important to you and do you ACTUALLY carry THAT or THOSE close to you? Or, do you THINK you do??? This movie is a think thinker!