I was able to attend an early screening earlier this week of CAPTAIN AMERICA: CIVIL WAR. So is all the hype leading UP to it worth it?

YES IT IS and a bag a chips (or my case, a pint of Ben & Jerry’s The Tonight Dough starring Jimmy Fallon).

I was pumped to see CAPTAIN AMERICA: CIVIL WAR. I have been waiting for it. Googling about it, listening to podcasts and following along the Press Tour. I was dying to know why are the Avengers fighting each other?!? WHY???

Confession time: I had mixed feelings about seeing it though.

Why? I didn’t want to see the Avengers fight each other.

Now once it was time to see the film, I was ready to face it. We all go through times in real life where we have a disagreement with a friend and hopefully, that will not lead to a Civil War, okay that’s dramatic, but you know what I mean. In real life – you talk it out.

Where do I stand?  #TeamCAP 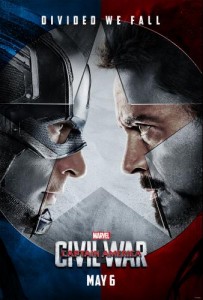 UNITED WE STAND, DIVIDED WE FALL

This statement tapped on my soul a bit. We can all have a difference of opinion but I think it’s how we communicate it. Do we really all have to agree all the time and if we don’t, will that tear us apart? I don’t think so. But I do think how we communicate will. This was a good time out lesson for myself, as a wife, as mom, as a friend – to be soft. (Ironic that this is a movie that involves a ton of fight scenes, literal fight scenes and here I am thinking about being soft.) Sorry about the tangent there but I love how in a Marvel film, we can grow a bit… mine was in communicating better next time.

Now onto to SHOW:

This movie is full of action (lots of it), laughs, violence and a pull of your heart strings.

“Marvel’s “Captain America: Civil War” finds Steve Rogers leading the newly formed team of Avengers in their continued efforts to safeguard humanity. But after another incident involving the Avengers results in collateral damage, political pressure mounts to install a system of accountability, headed by a governing body to oversee and direct the team. The new status quo fractures the Avengers, resulting in two camps—one led by Steve Rogers and his desire for the Avengers to remain free to defend humanity without government interference, and the other following Tony Stark’s surprising decision to support government oversight and accountability.”

So, let’s chat about the new characters being introduced. Holy awesome sauce!!

Spiderman – This is the best Spiderman ever! Spiderman was meant to be played by this actor. Every kid (and Marvel-obsessed adult) will want his super web-making powers.

Ant-Man of course is hilarious in the film (I love when Falcon and him meet UP again). Sharon Carter is also amazing is the one! Oh and for my friends wondering, they do mention our Norge, Thor. Whew, I know, that was nice of them.

But first… I need to have a moment with this, not because of why you think. Just wait.

This is a gasp scene. It made me curl up in a ball in my seat. It is intense and memorable and not just because of those ginormous muscles of Cap. In fact, I had to text one of my best friends, Tania, who also previewed the movie about this exact scene later that night. I included some of the “What the What” emojis to express my feelings to her about this scene. She agreed. Once you all see the film too, you will have to let me know if you had the same reaction.

Did you cover your face? Gasp? Or were you distracted by the big muscles?

Alright parents or guardians of littles out in the great wide somewhere..

Do I recommend this movie for young Wilderness Explorers?

Yes, as long as they have seen the other Marvel movies. I screened this movie before taking our littles to it (they are 6 and 8). So you may want to watch if first if you are on the fence even if your littles have seen Marvel movies before. Our littles both LOVE the Marvel movies and have their favorite characters so I know they are going to flip at this EPIC one and especially the new characters introduced! There is some swearing involved (no f-bomb) and our sweet Captain America will not correct anyone this time. Sorry folks. Also, there is no nudity and no sexual content.

I give Captain America: Civil War

Now it’s your turn to choose a side.

Leave me comment where you draw the line or what you thought of the movie.