Disney’s Pete’s Dragon is soaring into theaters this Friday!

Oakes Fegley is Pete in Disney’s PETE’S DRAGON, the story of a boy named Pete and his best friend Elliot, who just happens to be a dragon.

Last night I took my family to a media screening of Pete’s Dragon. When I invited my parents to join us, my dad said, “Yes, of course Lyn, you and Nicole, used to watch that movie every day – sometimes two-three times a day!”

As my parents confirmed, the classic version was a frequently watched movie in our household. To say I was overjoyed about seeing the version, only speaks a portion of my emotions. But this version is different, this Pete’s Dragon is re-imagined AND for the better in my opinion. Stick with me folks. You know I’m a lover of Disney and it’s classics. But I’m a parent now, times change, society changes, we change. I don’t dislike the classic Pete’s Dragon but I do have a new, wiser opinion on it. It still holds a special place in my heart, however, the new Pete’s Dragon is well done. This reimagined Pete’s Dragon touches on the similar family concept as the classic – Family, it can be your real family or be an extended family or someone (a dragon even) who makes you feel whole. 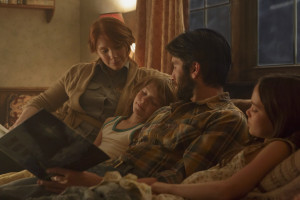 Yesterday, when our littles got home from school, I was so excited about our UPcoming evening, I had put on the original movie of Pete’s Dragon to get them ready for the new version. I snuggled with them and this time (because I had viewed trailers and knew small tidbits about the new one being somewhat different) the classic wasn’t sitting just right with me in the beginning. I didn’t find it as funny as I did as a kid. Sure, Pete was just as loveable and Elliot just as loyal, but the other characters…they were scary, they were down right awful. The whole kidnapping “adoptive” scene – my word! I sat there saddened by it. I talked about how cute Elliot was as a distractor from the ugly behavior from the scene.

The new Pete’s Dragon does start off kind of slow but I felt like it was on purpose to develop the characters and set a calming connection with the natural elements of the film. The core of Pete’s Dragon is about a 10 year old boy and his dragon, Elliot, in a majestic forest where they have made the land theirs; not in the way of owning it but in the way of embracing it, being with it – and it is glorious to take it all in.

“For years, old wood carver Mr. Meacham (Robert Redford) has delighted local children with his tales of the fierce dragon that resides deep in the woods of the Pacific Northwest. To his daughter, Grace (Bryce Dallas Howard), who works as a forest ranger, these stories are little more than tall tales…until she meets Pete (Oakes Fegley). Pete is a mysterious 10-year-old with no family and no home who claims to live in the woods with a giant, green dragon named Elliot. And from Pete’s descriptions, Elliot seems remarkably similar to the dragon from Mr. Meacham’s stories. With the help of Natalie (Oona Laurence), an 11-year-old girl whose father Jack (Wes Bentley) owns the local lumber mill, Grace sets out to determine where Pete came from, where he belongs, and the truth about this dragon.” 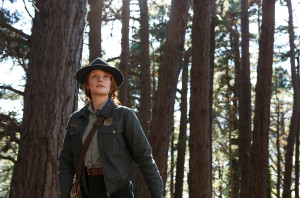 Pete – Loyal and curious. He is living in a serene forest with his best friend, a rare dragon.

Elliot – His introduction is colossal and memorable. You can see and feel the power of gentle touch to another soul is moving. He is kind and gentle yet assertive if needed.

Natalie – Another curious 10 year old who will help Pete

Grace – She’s the leading lady that is and always has been drawn to the forest. Her character is true and pure.

The power of a gentle and kind touch can create a bond that can last a lifetime, one that connects two souls that may be so different and unexpected yet so similar.

“Just cause you can’t see something, doesn’t mean it isn’t there.” – Mr Meacham

I loved this movie. I cried. I laughed. I smiled. I got mad. I cried some more. I wanted to leave the theater and head straight for the forest or in our case our Uncle’s cabin. Would we be so lucky to see Elliot? I imagine most will leave the theater with the hopes and wishes for an Elliot in their life…I know I’ll be looking UP to the sky just in case I see a dragon tail soaring high.

“Go north, go north with wings on your feet. North with the wind where the three rivers meet… Deep in the forest there dragons will be.” 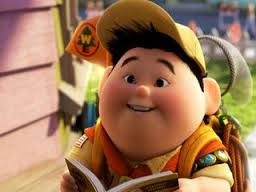 I took my 7 and 8 year olds to see this film and they both enjoyed it. In the very beginning of the film, there is a difficult scene. Shortly after that scene, there are a couple scare jump scene with growls but it is brief. You quickly get to enjoy the friendly and playful relationship of Pete and Elliot. Later on though, I realized that I was stressed out during the movie and had been biting all but three nails off (ugh, they were so long and pretty, now they are ouchy) because there is a “hunt” happening. This was rough for my kids and me. I was stressing! That’s all I have to say about that because, well no spoilers.

I give Pete’s Dragon

The wilderness is calling and you must go