The Light and Dark of A Wrinkle in Time Review

My family and I saw A Wrinkle in Time on Monday evening. I thought I would be able to write my review right after the screening because I had recently read the book; that wasn’t the case. I needed a couple days to simmer on my thoughts after seeing the movie. This was the first time I felt conflicted about how I was going to rate a movie. Since I had read the book prior to seeing the movie, I knew I went into the film with some pre-conceived notions; however, a recurring theme in the movie didn’t sit well with me.

(Something I’d like to note: I haven’t read any of my friends’ reviews that went to the Red Carpet Event or previewed the film, too, so I don’t know if they are having the same views. After I publish this, I’m eager to start reading Amiyrah, Brandi, Tania, and Patti’s thoughts on the movie.)

“The three celestial beings, Mrs. Whatsit (Reese Witherspoon), Mrs. Who (Mindy Kaling) and Mrs. Which (Oprah Winfrey) in Disney’s A WRINKLE IN TIME, an epic adventure directed by Ava DuVernay and based on Madeleine L’Engle’s timeless classic which takes audiences across dimensions of time and space, examining the nature of darkness versus light and ultimately, the triumph of love. Through one girl’s transformative journey led by three celestial guides, we discover that strength comes from embracing one’s individuality and that the best way to triumph over fear to travel by one’s own light.”

Meg Murry – is a middle-school student who struggles with self-confidence and is missing her Father dearly, who went missing about 4 years ago.

Charles Wallace – is a gifted and say-what’s-on-his-mind type of brother.

Mrs. Whatsit – played by Reese Witherspoon, is one of three celestial guides.

Mrs. Who – played by Mindy Kaling, is another celestial guide who speaks in quotes. My favorite, “The wound is the place where the Light enters you.” – Rumi

Mrs. Which – played by Oprah, is the other celestial guide and my favorite of them because she not only guides but teaches Meg.

The Happy Medium – This was my favorite supporting role. Zach Galifianakis was amazing and I found myself nodding along with a pleasant smile during this section.

Storm Reid is Meg Murry in Disney’s A WRINKLE IN TIME. 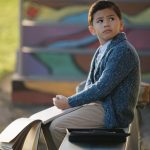 Deric McCage is Charles Wallace Murry in Disney’s A WRINKLE IN TIME. 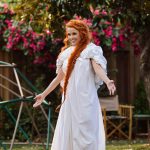 Reese Witherspoon is Mrs Whatsit in Disney’s A WRINKLE IN TIME. 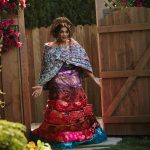 Mindy Kaling is Mrs Who in Disney’s A WRINKLE IN TIME. 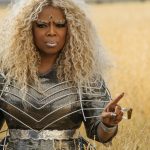 Oprah Winfrey is Mrs. Which in Disney’s A WRINKLE IN TIME. 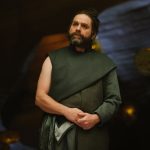 Zach Galifianakis is The Happy Medium in Disney’s A WRINKLE IN TIME.

We took our 8 and 10 year old to this movie and both of them enjoyed it. I feel like it was appropriate for both of them. But I wouldn’t take a child younger than that. The Darkness in this movie is a little intense and there are a couple of scenes with “red eyes” and an evil voice paired with the eyes that I was worried about for my kids. I was worried (and still am) about the recurring theme I mentioned earlier that didn’t sit well with me. The theme is the negativity, be it internal or external, that the character Meg deals with. I’ll dive into this more below.

Not quite; I give it 4.5 balloons. Here’s why: While I loved the movie and how the concept of Light and Darkness was portrayed, I had a VERY hard time with the intensity and relentlessness of the negativity. Mrs. Whatsit (Reese Whitherspoon) was a particularly negative character, always doubting Meg and highlighting her “faults”. I understand that Meg’s character is down on herself in the book, and yes, I had a VERY difficult time reading that. It was very hard to see the negative self-talk of Meg AND even harder to watch one of her celestial guides fuel the negative fire. It just didn’t sit right with me (or my husband) as a parent. I sat there squinching my face every time Mrs. Whatsit would make a joke about Meg’s faults and my heart would hurt. I get that the director/writer may have been trying to add in humor but I always try to instill positivity and positive self-talk.

What I loved: It was visually beautiful.

The overall message that there will always be Light vs. Dark in the world but you must ALWAYS listen to your inner voice, your inner spirit, THAT voice will guide you. I have always talked to my kids about listening to that voice.

Whatever you choose to call the LIGHT, listen to it.

I watched an interview this morning with Oprah. She talked about how YOU have to have your OWN voice. Call it what YOU need to, for me it’s the Light. Don’t let the noise of others bother you. Focus on the Light, there’s darkness everywhere (I intentionally did not capitalize darkness because I did not want to give it more energy).

A Wrinkle in Time hits theaters everywhere this Friday!