“In Zootopia, anyone can be anything!”

No matter who you are in Zootopia, prey or predator, you can become anything you want. A tiny mole can aspire to be a construction worker, a cheetah can be a dancer, and an elephant can be a naturalist yoga instructor.

I had the privilege to watch an early screening of the new Disney Animated feature, Zootopia earlier this week be-FUR getting to INTERVIEW the Directors of the film! First off, let me tell you, Zootopia is a beautifully made film. Yes, I know I’m known Disney fan. However, this movie comes to life in the theater – it is vibrant and realistic! Yes, the animals are upright and wearing clothes but the cinematography in it is phenomenal.

The themes in this movie are very timely …

it deals with racism, sexism, biases, bullying, fear, and more.

The lessons in this movie are deep and will hopefully bring out some important discussions with your family. Don’t judge people before you know them (just because someone is a fox doesn’t mean they are bad, just because someone is a rabbit doesn’t mean they can’t be brave and adventurous like a cop). The topic of bullying is brought up and how friends can be there for one another. But also when someone is being bullied that if you can take a moment to look into the why the person doing the bullying: Is there something negative going on in their life? Is there something you can do to help them instead of hating them?

I also want to give a small warning that there is a jump-scare scene that might cause you really-littles to get upset. It is very brief and is the only one.

Everyone has a story, everyone has layers, try to understand where others are coming from.

“It’s about discovering layers that are hidden in yourself and in others that you don’t know are there, and that’s sort of a revelation that happens when you really take a moment to look deeply in yourself and learn more deeply about where other people are coming from. People who you might initially think, I understand that person completely, when you really, you really, don’t.” – Byron Howard

Judy Hopps’ character is a lovable rabbit for strong-willed daughters everywhere. My daughter came out of the theater loving her (as I knew she would – she always loves the independent princess, and I’m not saying Judy is a princess but she is the leading lady). Judy Hopps knows what she wants in life and she is determined to see that goal to fruition. She is not distracted by the love of a man but she greatly appreciates the friendship of Nick Wilde and she realizes she needs his friendship. In Zootopia, you will watch Judy Hopps grow as she follows her calling in life.

You see young Judy Hopps aspire to be an Officer in the Zootopia Police Department. Her parents, though, have fear about such a dangerous job – that she’s too small, there’s never been a rabbit Officer before, it’s a job for the larger/more aggressive animals, she should just be a carrot farmer like them. It broke my heart that Judy’s parents didn’t lift her up in her choice. This is where my self-reflection on my own mama-skills come in. Dang! Am I holding back my own “Merida” and lil’ Reef?!?! I am a known “helicopter” mom (but in a good way, right?!?!). We call her Merida because she is so brave and wants to do brave-adventurous things like archery, snowboard, hike, dance, and swim (some of which make me nervous for her). I haven’t allowed her to have sleep-overs yet because of my worries … but is she seeing my fear? With my lil Reef, he has different social challenges than her, I feel like my wings have to be wider for him because he computes life slightly differently. Parenting is hard. There was another parenting scene when Judy makes a phone call home (that I won’t give away) which made me really check myself and my reactions to information my children give me – I know we all make mistakes. The scene made sense; I could understand where her parents were coming from. We want our kids safe even though our thoughts of safety may cloud our compassion and empathy at times. Again, as adults (and as parents) we have to put ourselves in others shoes (and maybe not react). 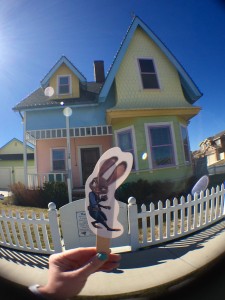 “It’s not how badly you want something, its what you’re capable of.” – Officer Bogo 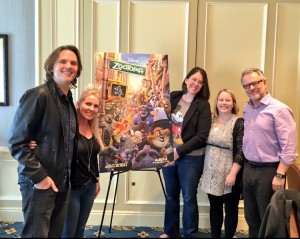 To have the opportunity to sit down with the directors of Zootopia and ask them questions and hear stories of inspiration for the film was surreal. There were two other local bloggers along with me for the wild ride for a chat with Zootopia directors, Byron Howard (who also directed Tangled and Bolt) and Rich Moore (who also directed Wreck-It Ralph and The Simpsons). I had a very serious question for them to start:

Yes, guys. I went there. Byron and Rich had quite the laugh. We all did. When you see the movie you will die laughing. 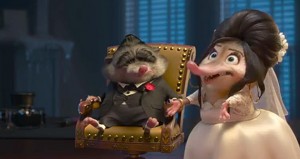 Shrew-ump -IT! Photo courtesy of Disney

Byron: “If Snooki wears it, then yes! {laughter}

Me: “Okay, so is she Snooki-inspired?”

We were all laughing so hard that one of them said a “Shrew-ump-IT!” and then we all died laughing again.

Disney’s classic movie, Robin Hood, was a big influence on Zootopia. Byron Howard had such an obsession with foxes as a child. He shared a funny story from his childhood with us. Byron begged his dad for about a year straight for a fox, “I want a fox! I want a fox! I want a fox, I could name him Foxy!” His dad warned him that a fox was a wild animal and that he did not want a fox for a pet. So his dad put Byron in the car and drove him to a wildlife refuge so go meet a fox in their real habitat. So the keeper brought a fox from their cage. (Byron told us how foxes are wired and are like a hyper dog. They are not cuddly.) So after that experience, Byron reconsidered the fox as a pet and got a gardner snake as pet.

I had to ask Byron after that story if that’s where the “savage” part came into play in the movie. Byron and Rich said that was interesting! That they hadn’t thought about that, but maybe, and that the savage part was in the movie very very early in that film and that Byron’s dad taking him to the wildlife refuge may have been where that came from. I asked if his dad used “savage” ever? He said he didn’t think so and laughed and they both said his dad will not receive Screenwriting credit (jokingly of course).

Guys, we laughed so much.

How the directors accomplish this amazing feat is because they shoot a lot of reference video of the actors video as their recording. Jason Bateman is the voice to Nick Wilde, you can see Jason Bateman’s features come out in Nick’s mouth. The animators pay attention to Jason Bateman as he talks and see what his mouth shape does.

I had to ask if Zootopia was a mashUP of a cities like in Big Hero 6 was. Oh, the list went on and on… I couldn’t write fast enough and I’m not sure I wrote them all down. {insert Goofy face} Zootopia is inspired by cities from all over the world with different climates, agriculture, and food in each with the message of anyone can be anything. 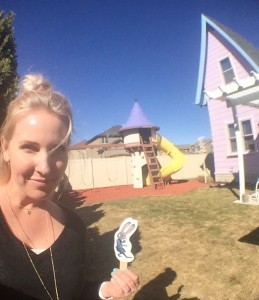 Byron & Rich, I was wearing a fox necklace for the interview 🙂

Byron and Rich, thank you for taking the time to chat with me, it was a pleasure. Your film is a beauty. Thank you for the making a film that evokes family discussions and also brings joy. I hope to catch UP with you again.

My take on Zootopia? I give it 5 out of 5 Balloons

“Life’s a little bit messy, we all make mistakes, no matter what type of animal you are CHANGE starts with you.” – Officer Judy Hopps

8 Responses to Interview with ZOOTOPIA Directors