The Light Between Oceans Movie Review

I needed a couple days to think about the last movie I screened, The Light Between Oceans…because it has all the feels and it takes your soul to difficult places. (You may have read that and went, I don’t want to go to a difficult place, not all viewers can.)

Life has it’s ups, downs, and everything in the middle; love, joy, anticipation, failure, desperation, good, sadness, and how you deal and react to them. This movie is a romantic love story where morals are called into question. Partners will have to ask each other; do we turn a blind eye for love and the will to become a Mother, or do we not?

This movie has some of the best actors in it, Michael Fassbender and Alicia Vikander, share the leading roles. Their love story is both beautiful and heart-breaking.

“’The Light Between Oceans’ is a film about love, truth and the secrets people keep in relationships, and what happens when those secrets are exposed to the light of day,” says Cianfrance. “It is a moral drama, but at the core, it is a timeless love story.” 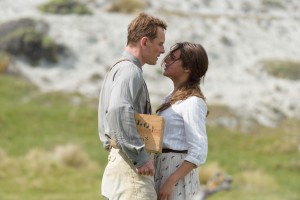 Michael Fassbender stars as Tom Sherbourne and Alicia Vikander as his wife Isabel in DreamWorks Pictures poignant drama THE LIGHT BETWEEN OCEANS, written and directed by Derek Cianfrance based on the acclaimed novel by M.L. Stedman.

As I watched this film, the term ethical dilemma kept creeping up in my head numerous times; Why? Because Isabel and Tom rescue a baby girl lost at sea and raise her as their own. 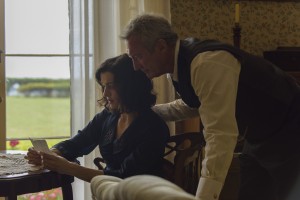 Oscar (TM) winner Rachel Weisz is Hannah Roennfeldt and Bryan Brown is Septimus Potts in the poignant drama THE LIGHT BETWEEN OCEANS, written and directed by Derek Cianfrance and based on the acclaimed novel by M.L. Steadman.

This movie is a love story that will woo you but also have you quietly gasping, “Oh no” to yourself or shedding a tear or two. At times, I felt knots in my stomach for more than one character at a time. Love can make people do crazy things to make their dreams come true, clouding their judgement or blurring the lines of integrity. 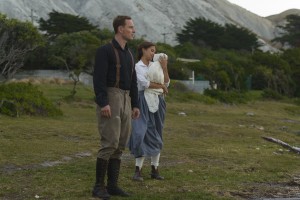 This movie also touches on death and what the definition can mean to the people left behind. Is there ever a definition??? I have lost loved ones but never a parent or child. My heart ached to watch this scene, Isabel (Alicia Vikander), touched on the fragile moment so gently.

Isabel talked about confusion and loneliness with this role with the loss of her brother from the war.

I love a good love story. Who doesn’t, right?  Tom and Isabel have a deep love for each other. They both learn that it’s important to open up; when they do, they can heal old wounds and find a new, stronger love.

“You only have to forgive once… to resent, to hold all the bad things all day, it takes too much work.” -Tom

The Light Between Oceans is not for young Wilderness Explorers. Do I recommend it? Yes. But be prepared for your emotions to run wild. I left the theater in a quiet mood, if that makes sense. Usually after screening a movie, I’m full of emotions wanting to share and chit chat, this one … not so much. My heart was heavy. I felt so much for all of the characters in the film. I wanted so much for each of them. I had love for each of them. This movie is a love story and what is done, is done out of love, which confuses right and wrong. So if you decide to see this film, prepare yourself for strong, emotional content.

I give THE LIGHT BETWEEN OCEANS

THE LIGHT BETWEEN OCEANS